This is a very talented and very skilled North Carolina Fishing skipper that along with some fellow guides, have developed some awesome tactics and timing for targeting giant Red Fish. Giant Redfish– meaning Redfish over 40”, ranging into the 50” class and generally being the biggest Red most clients will have ever caught. It is purely a Trophy fishery- all those giant spawners are released. That is the type of fish that gets Butch excited. So of course he just had to book a trip and take some friends and clients to fish the rivers draining into Pamlico Sound. Those rivers are the magnets that pull in these giant reds. 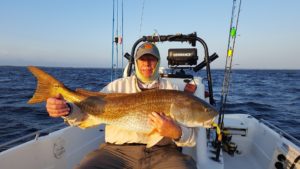 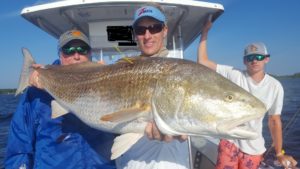 REDFISH: Butch fished in late August of 2018, knowing the spawning run starts about mid- August and can run into Mid-October. The two boats they chartered were 22-24’ center console bay style boats. Fishing was using popping corks and artificial baits. The trick was knowing where to look and there is lots of empty water! By the end of 2.5 days of fishing, the group of 4 had taken 19 trophy redfish, with 17 of them between 42” and 51.5”. The biggest was estimated at between 55 and 60 pounds- a true beast with a huge body and giant head that took Butch deep into the spool on a number of runs. All rods and all tackle was supplied by the various skippers they fished with. And everyone agreed, you could not pick out a single best skipper- they were all absolutely top notch—friendly, hard working, very knowledgeable and dialed into the where and how of that fishery. They arranged some very nice lodging. You handle your own meals and there are some awesome restaurants within walking distance of the suites you stay in. 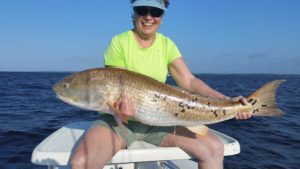 Do expect to work for your fish- popping those big specialized corks for hours is tiring- all forgotten the moment you get a hit! Do not expect big numbers- we think 2 to 5 fish a day is a norm- high hook days can easily double that though. Butch has fished the famous redfish fishery in Venice with a top notch skipper- but they did not have fish this size! If you want a trophy mount, then pictures and a tape measure will get you a nice replica mount, and you can then release the big spawners to continue the fishery!

STRIPED BASS:
This operation also does high volume striped Bass, shad with fly rods and convention tackle, flounder and many other species. We got wind of the size of the Reds being caught, and just had to get this operation signed up. We have caught many giant Reds in Venice, LA, but those 25 and 30 pounders are well shy of the giants these guys turn up! Add to that their awesome high volume striper fishing in the fall and winter- and you have a great operation.
Your skipper has a degree in Fish and Wildlife Management, is personable and incredibly talented at putting together the right species, at right place and at the right time, to wear you out! Said one happy client:
“When my brother-in-law told me we were going striper fishing I didn’t know what to expect. Never caught so many fish so fast. Thanks again for a great time!” Dave T.

You can fish the Roanoke River, the Pamlico River, the Neuse River, Albemarle Sound, Pamlico Sound and also fresh and brackish water species. And if you want fly fishing they happily cater to you; or if a spin fisher, that is all just great as well. With nearly 30 years of Striper fishing experience in NC, this outfitter has proven his area has a world class Striped Bass fishery. Six months a year Stripers are the main target species. Fishing takes place wherever the runs are best at the time- from Western Albemarle Sound to the Roanoke River and the Pamlico River. High volume fishing is what the Captain aims to produce for his customers and methods include live bait, casting with light tackle and he doesn’t leave home without a Fly Rod. From Mid October through June you can find some of most explosive fishing the Inner Banks has to offer. Just tell us your wishes and we will design the perfect adventure to fit your style!

It is a true art form to be able to produce great fishing opportunities throughout the fishes migration, including pre-spawn, spawn and post-spawn. He has mastered techniques to target late Fall and Winter Stripers and turned what was once a trolling fishery into a high volume casting and fly fishery. As these fish begin to change patterns for spawn they will adapt fishing styles and locations to stick with the major body of Stripers. For example on low water years you might see fish as far up the Roanoke River as Weldon and some years they can produce record numbers in the lower portions of the river. As for the Pamlico the motions are the same but the timeline is much different therefore this operation combines the “best current intel” for the different river systems, thereby providing angler with some great action..

TROPHY REDFISH: Your quest for trophy Reds starts in late July and runs through the 2nd week in October. Since 2008 his clients have averaged a 90%+ success rate on landing trophy class Red fish, meaning a fish 40 inches or greater in length. Fish of this class bottom out 50lb scales! These trophy class Reds are targeted using artificial lures and bait fishing. They also offer guided trips for the Fly angler with outstanding results. They feel they can put you on a class of Drum that can’t be matched anywhere in the U.S.! And by covering the Inner Banks, they are able to extend the “traditional” fishing season for big fish. Starting in the upper Pamlico Sound we follow big schools from Swan Quarter through the Pungo River, Pamlico River, through the Bay River and out the Neuse River. Needless to say they push the extra mile to make sure their anglers get to experience the best of the Inner Banks. 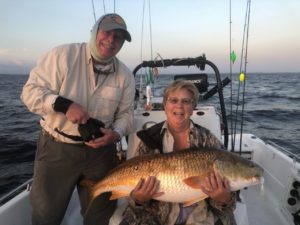 Joan Manasse with one of her big reds

TARPON ; Many consider the Tarpon to be the ultimate quarry, with explosive power, mind boggling jumps, runs of hundreds of yards and a truly pugnacious attitude. This outfitter has won the local big Tarpon prize, and he lover to guide tarpon fisher from Late June the mid August. These fish can exceed 80 pounds.

SALTWATER FLY FISHING: Beginner or advanced, he welcomes any skill level fly angler aboard his charters. Don’t know if you want to be a fly angler? Simply ask he will supply all the gear and get you going!! As a casting instructor and fly tier, he truly relishes the reward of introducing anglers to fly fishing. For the anglers that have been in the sport for decades he’ll explore the ad venture of trying for a tighter loop — or just not worry about the loop and concentrate on setting some hooks on some good fish!

OPTIONS: Easily reachable — you need to experience fishing in some of the most versatile waters in NC, the Inner Banks. Conventional spin and casting tackle works very well. And if you fly fish, he has a place for every weight rod in the books. Use a 4 weight fly rod to land huge Bream or the Poor Man’s Tarpon (Shad). OR- Step up to a 6 weight and whack schooling Stripers or an 8 weight to pull them from the current of the Roanoke River. OR- target 40 pound plus redfish on a 9 or 10wt on the Pamlico Sound and it tributary rivers!

Let’s not forget some of the largest Gar on record. Yes this Captain has unofficially beaten the state record fish several times over the past few years. To make the weights official , the angler has to kill the fish and their choice has been to release. Best times to target these trophy class fish is Jan-March

FLOUNDER : He also has wonderful flounder fish in the Pungo River, the Pamlico river, the Sound and the Neuse River.. They are good size fish that produce awesome filets!

OTHER OPTIONS: Shark fishing, Albacore fishing, stripers, Shad, flounder- you can make it a whirlwind tour- even use fly rods as well. Just ask and we can customize it.

LODGING: He will arrange your lodging as well, if you wish. He uses a very upscale hotel (with a limited kitchen facility)s on the water, with great local restaurants in walking distance. Thus for example, if say you want to do three people, for 3 days of Redfishing, in one boat: Fish 3 full days @ $1000/day with lodging.. Split 3 ways it is about $333 apiece with lodging. For three days, under $1000 apiece! Meals are extra of course, but local places are in walking distance of your upscale lodging.
Nice place to stay!!! 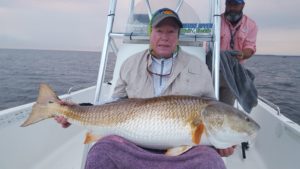