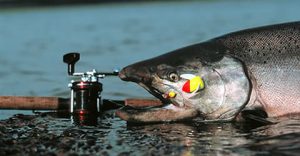 Most serious Salmon fishermen in Alaska will talk about the Nushagak River and its’ legendary 75 to 100 fish days! Burned thumbs, weary arms, bull dog runs, blindingly fast hits- these are strong fighting and tough fish. Enough so that some days you are ready (almost!) to cry Uncle and throw in the towel! This river also hosts staggering runs of mint bright chum salmon, sockeyes and silvers, with an occasional grayling or Dolly Varden thrown in. These King Salmon are fresh out of the salt, and will average 17 to 25 pounds, although 30’s are caught. The chums which are also fresh out of the ocean and therefore are delicious eating (really) and will average 7 to 10 pounds. It is normal to hit 30 to 60 fish per day per boat. We really like the fact that this operation is a small one- a maximum of 8 fishermen per week!  This fishery is basically from mid June to Mid July- about 4 weeks! So book very early on!!  You fish from big hefty 20 foot boats, 4 per boat with a knowledgeable local guide who knows the river well.  Normally you will side drift. Side drifting is a west coast technique, whereby you toss your baits or lures out at about a 90 degree angle from the boat, then the boat is operated at a speed to match the current and the drifting bait. Offerings then move at current speed and in a natural manner, and you are holding the rod for the strikes! They will also sometimes backtroll when called for, but side drifting is the favorite. You stay in really nice 2 man tents, with wooden floors and heaters. There is a shower tent and also a cook tent. Only a maximum of 8 fishermen in Camp. A normal day starts with a big breakfast, then onto the water and fish until noon. Have lunch, maybe a short nap, and hit it again until about 6PM, when its dinner. After dinner, you can loaf or fish off the banks. You are in the heart of the fishing area, so bank fishing works! In fact staff will fillet your fish as fast as you can catch them! One side note- this operation does a very good job with mosquito control- which can be important. During our checking out this operation, it quickly became apparent that many references had been back numerous times. One said he had been the last 6 consecutive years, and said he would be back for the next 6 too! All references stressed the well managed camps and the hard working guides and staff. Everyone gives you their very best was a universal comment.

Your catch is filleted daily, carefully marked with your name, then vacuum bagged and frozen in their deep freeze , which is brought in by boat every year! They have a generator for the freezer as there is no electricity this remote! No charge for this service, whereas most camps charge by the pound to vacuum seal. You will take a float plane from Dillingham to camp, and that is included in the price.

Also included in the price is all fishing gear, and if you lose a lure you do not get charged for that! Trips are normally 6 days, 5 nights. You yearly limit of king salmon is 4 fish per person, but plenty of chums can fill in for the 50 pounds! In short, you can basically just pack your clothing and come on this trip!! Ask us for a suggested clothing list. You can also bring your own fishing gear, if you wish. Butch,  He and his staff do an excellent job of taking good care of us! My trip in June will be my third in a row! Arriving by float plane to fish for large Chinook in Alaska doesn’t get any better! They pay special attention to taking care of the details and I plan on continuing to fish with Kent in the future! I will make three trips to Alaska this summer between June and September for fishing! As a local guide says, “The Tug is the Drug”! Tight Lines – Bob LIMITS:
You practice a daily limit of one king salmon per person on the Nushagak (regulations allow retaining 1 king under 28” and 1 king over 28” per day, however, the use of bait is not allowed after retaking the second king). Annual limit is 4 kings of any size. Unlike many rivers in Alaska, the Nushagak regulations allow catch and release fishing after retaining your daily/annual limit. Our king salmon range in size from 8 – 50 lbs with most in the 18-30 lb class. Our location is influenced by the tides and all salmon are fresh from the ocean, bright silver, eager biters and full of energy. You will be amazed at the power of a 20 lb king. For anglers wanting to take additional salmon home, regulations allow retaining 5 “jacks” daily (kings under 20”) plus 5 chum and/or sockeye per day with no annual limit. 4 average kings will fill a 50# fish box. Included in the package is all salmon retained will be commercially vacuum packed in 1-2 lb pieces, then frozen and boxed for transport home. Due to the small camp occupancy we are able to handle each fish individually and you are guaranteed to go home with the salmon you caught.