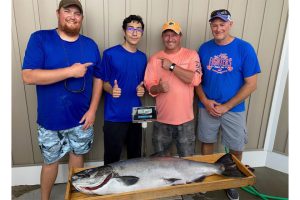 Michigan has a new state fishing record for chinook salmon after a successful outing on Lake Michigan Saturday morning resulted in a trophy fish that eclipsed a 43-year-old record by nearly two pounds.

The new record was caught on a Moonshine Raspberry Carbon Spoon, the DNR reported.

“I never expected a catch like this would happen,” Martinez said in a DNR news release. “It’s possible for anyone if I can do it! I would like to extend a great ‘thank you’ to Capt. Bobby, as it was he who made this catch possible for me.”